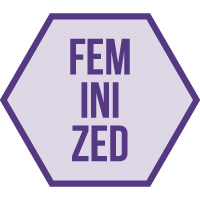 With predominantly Sativa genetics and an average 25% THC content, Afghan Hawaiian x Laos x Jamaican is no less than a mind-blowing three-way hybrid that’s guaranteed to test your tolerance and your cultivation chops...

Chances are, you don’t need us to spell out for you which three all-time classics came together to create this new-generation hybrid. Erring heavily towards the Sativa side of the scale, this is exactly the type of strain you need when looking to boost your mood and generally improve your day.


Energizing, motivating and empowering in the extreme, Afghan Hawaiian x Laos x Jamaican gets to work with fast-paced high that’s great for daytime use.


What’s the catch? Shy of the fact you’ll need a pretty well-developed THC tolerance, there isn’t one. Often testing for as much as 25% THC, Afghan Hawaiian x Laos x Jamaican has a tendency to tread a fine line between enjoyable and overwhelming.


Consume a little and you’re fired up for a busy day - consume a lot and you’re in for the psychedelic experience of a lifetime. Moderation therefore, is key, unless propelling yourself all the way into Wonderland is your objective.


Still, there’s enough Indica genetics in this three-way cross to bring at least a little physical relaxation into the mix. Not to such an extent as to knock you out, but enough to keep you physically grounded for the duration.


Afghan Hawaiian x Laos x Jamaican Feminized is far from the simplest plant to grow at home, but guarantees stupendous rewards for those who make the grade. It’s not as if you need much 25% THC weed to have the desired effect, but the way these beauties yield almost always sets you up with more than you’ll know what to do with.

On the nose, properly cured buds entice with a sweet and juicy peach-like aroma, spiked with sharp citrus and a wave of underlying dank. There’s more classic skunky goodness when the buds are broken, complimented with a gentle layer of spice when burned.


The flavor isn’t quite as sweet as it is sour, with a pronounced bitterness like unsweetened lemons. Citrus notes take precedence on both the inhale and the exhale, complemented by a smooth and satisfying smoke that’s also exceptionally refreshing. The curious sweet and sour citrus fragrance lingers in the vicinity for hours on end, though with more than enough old-school cannabis stink to give the game away.


She's not the easiest strain to keep under wraps, but also isn't too difficult to keep discreet before actually setting fire to the buds.

The ancestry of Afghan Hawaiian x Laos x Jamaican paved the way for a predominantly Sativa hybrid, which delivers the high-energy experience needed when dealing with a depressingly dull day.


It’s important to bear in mind that moderation is essential with this herb, as THC in the region of 25% is pretty much the norm. Particularly if you need to function like a normal member of the human race for the next few hours, treading carefully is the way to go.


Consumed in modest quantities, Afghan Hawaiian x Laos x Jamaican Fem brings on the most inspiring and near-intoxicating sense of confidence and outgoingness.


This is the kind of strain that fires you up for whatever it is you happen to be doing - anything from complex projects at work to the most mundane of chores at home. You’re inspired to give it your best and show the world what you can do, all the while with a sense of complete contentment and optimism.


Still, take it just a toke too far and you’ll probably find yourself chatting both relentlessly and nonsensically to anyone in the vicinity. All accompanied by a moronic grin from ear to ear, making it pretty obvious to everyone around you’ve had more than a cup of coffee. Particularly if and when the whole thing descends into fits of hysterical laughter, you’ll find it practically impossible to focus on anything important.


The Indica side of the high makes its presence known after an hour or two, though manifests as little more than a very slight sensation of warm relaxation.

As you’d expect from a strain with predominantly Sativa genetics, Afghan Hawaiian x Laos x Jamaican has a long list of potential therapeutic applications. The vast majority of which are psychological in nature - any physical effects being significantly less pronounced.


Anything and everything that may be on your mind at the time is eradicated in a single toke. With a THC content that often hovers around 25%, you need only a tiny quantity of this stuff to put you in a better state of mind. Even those plagued by relatively severe anxiety, stress, depression and mood issues have reported remarkable and long-lasting relief after switching to this strain.


This cannabis can also be just the thing for dealing with bouts of lethargy, or when struggling to cope with the aftereffects of a poor night’s sleep. Though it’s worth pointing out that anyone struggling with insomnia (temporary or ongoing) should avoid Sativa-heavy cannabis at all costs.


Speaking of which, the same also applies to anyone with an underdeveloped THC tolerance or a history of panic attacks. The way this herb hits after those first few tokes is often too hard and heavy for even experienced smokers to handle - newcomers and novice users having no chance whatsoever!

In terms of the actual cultivation process itself, this isn’t a particularly difficult strain to grow. She's not hugely demanding where weather or soil conditions are concerned, nor is she particularly susceptible to mold, mildew and rot.


Instead, the challenge here lies in the fact that unless you go nuts with the pruning and training, your plants will easily exceed 18-20 feet in height. All the while bending and breaking under their own weight, due to their tendency to overestimate their own capabilities.


Subsequently, outdoor growing in a reasonably stable environment is really the only way to go. Structural support will be essential from start to finish, which should also be taken into account.


Flowering times can be somewhat lengthy at around 13 weeks, but this really isn’t long to wait for the spectacular yields that follow. Get it right and it’s perfectly possible for a single Afghan Hawaiian x Laos x Jamaican plant to produce as much as 1.2kg of weed!

Growing your own Afghan Hawaiian x Laos x Jamaican at home isn’t impossible and can be extremely rewarding. It’s simply a case of finding an appropriate outdoor spot, choosing the right time of year and providing your plants with the structural support they need. All of which is a small price to pay, when considering just how much ultra-potent weed you’ll be harvesting a while later.


With predominantly Sativa genetics and an average 25% THC content, Afghan Hawaiian x Laos x Jamaican is no less than a mind-blowing three-way hybrid that’s guaranteed to test your tolerance and your cultivation chops.