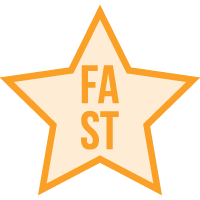 How do you improve on a superstar strain like AK-47? Easy - you make it faster! Where time is a factor (or you’re not the most patient grower), this swift-flowering specimen has you covered...

A Blast from the Past…and Fast

How do you improve on a superstar strain like AK-47? Easy - you make it faster! Where time is a factor (or you’re not the most patient grower), this swift-flowering specimen has you covered.


Combining the genetics of four mind-blowing strains into one lethal weapon, AK-47 Fast Version is an all-time favorite for a long list of reasons. This strain’s been doing her thing in recreational and medical cannabis circles for decades, picking up endless awards (and Cannabis Cup titles) along the way. AK is, in every sense, the strain to reach for if you’re simply looking to feel fantastic - whatever the occasion.


Rather than blowing you into the middle of next week, AK-47 Fast Version is all about good vibes, good times and good people. She’s a relatively gentle strain with an average THC content of around 20%, which combines approximately 65% Sativa genetics with 35% Indica. Exactly as you’d expect, the high is predominantly uplifting and mood-boosting, with just the right amount of physical relaxation and contentment bubbling in the background.


We’ve got Serious Seeds to thank for bringing the original into existence in the early 90s, which has since gone on to take over the world. Now available in an extensive range of specially engineered variants - including this fast version - AK-47 is bigger and better than it has ever been. Combining the genetics of Colombian, Mexican, Thai, and Afghani landrace strains, this hybrid guarantees a fantastically old-school experience in record fast timing.

AK-47 has an enviable composition of terpenes, which some say come together to create a fragrance not dissimilar to gunpowder. Whether or not that is a case of subconscious association is open to debate, but what we do know is that AK-47 Fast Version contains copious quantities of myrcene, caryophyllene and pinene - noted for their herbal, peppery and piney scents accordingly.


There’s nothing particularly complex or sophisticated to the fragrance of these buds, which is just about as dank and skunky as it gets. Old-school in the extreme, this strain is bursting with early 90s Amsterdam coffeeshop vibes. Though what’s interesting is how despite such pungency and heaviness, the smoke is surprisingly palatable and refreshing.


There’s a ton more sweetness on the exhale than you would expect, with plenty of pine-citrus flavors. Some say vaping AK-47 is the way to go, but purists will tell you anything other than burning these buds is an affront to its origins. We’ll let you decide for yourself!

The effects of AK across the board are legendary. In the case of AK-47 Fast Version, you can expect the same mood-boosting high you’d get from any other version of this all-time classic. More uplifting than incapacitating, these buds bring on the kind of beautifully balanced high that’s fantastic for almost all occasions.


20% THC keeps things punchy, but in no way overwhelming. There’s also a decent dose of CBD in a good batch of these old-school beauties (around 1.5%) which brings even greater enjoyment and balance to the high.


Right off the bat, AK-47 gets to work with a brain-busting headrush that eliminates every shred of negativity from the equation. Optimism, inspiration and euphoria come on in waves, along with a sense of creativity artistic types just can’t get enough of.


Hysterical laughter is also practically inevitable as the ride continues, making this one to avoid in formal or professional settings.


After a while, those potent Indica genetics begin to creep into the mix, sending a warm and tingling wave of relaxation through the body. Never to such an extent as to completely incapacitate you, but more than enough to bring on an extended bout of laziness. Perfect for evenings of pure indulgence at home, or a relaxed afternoon outdoors doing whatever takes your fancy.


The experience as a whole routinely lasts for a good few hours or so, meaning a little of this stuff goes a very long way.

The fact that AK is such a beautifully balanced strain makes her a fantastic choice for a long list of medical complaints. Primarily, the effects of AK-47 Fast Version are mood-boosting in nature, rather than physical. This makes these buds a fantastic choice for treating various psychological ailments, ranging from mild depression to everyday stress and the occasional bout of anxiety.


Importantly, if you’re simply feeling like garbage and need something to bring you back around, a few tokes of this stuff will have you feeling your best in no time flat.


On the physical side of the spectrum, AK-47 Fast Version is often used to treat headaches, migraines, joint stiffness and mild pain conditions. You won’t experience that ‘numbing’ effect you’d associate with a strong Indica, but this hybrid can nonetheless bring a decent amount of relief in measured doses.


One thing to be aware of is the fact that the THC content here can vary quite considerably. Things average out at around 20%, but can nonetheless dip as low as 15% or climb as high as 25%. For obvious reasons, the potency of the high therefore also varies significantly. Start out with small quantities of AK-47 at first, until you know exactly what you’re dealing with.

AK-47 Fast Version differs from the regular version in that the overall ‘seed to harvest’ time is slightly reduced, with the trade-off of a fractionally reduced harvest. Exactly how long it takes to get the job done will depend entirely on your preferred cultivation method and the conditions your plants are exposed to.


All types of AK are relatively easy to grow, provided that humidity levels and temperatures are monitored along the way. Flowering times average eight weeks or so, after which you could be looking at an average of say 12oz of quality cannabis from every mature plant. Outdoor yields can be more generous than indoor yields, but only if weather conditions are ideal.

If you know AK, you’ll know exactly what to expect from these supercharged speedy beans. This is everything you know and love about the original, only with a reduced seed to harvest time for faster results. Accelerated versions of traditional strains typically mean slightly reduced yields, but it’s not as if you need a lot of this stuff to have the desired effect.


Beautifully balanced and great for all occasions, AK-47 is an absolute legend in recreational and medical cannabis circles alike. The fact that these plants are so easy to grow is simply an added bonus.