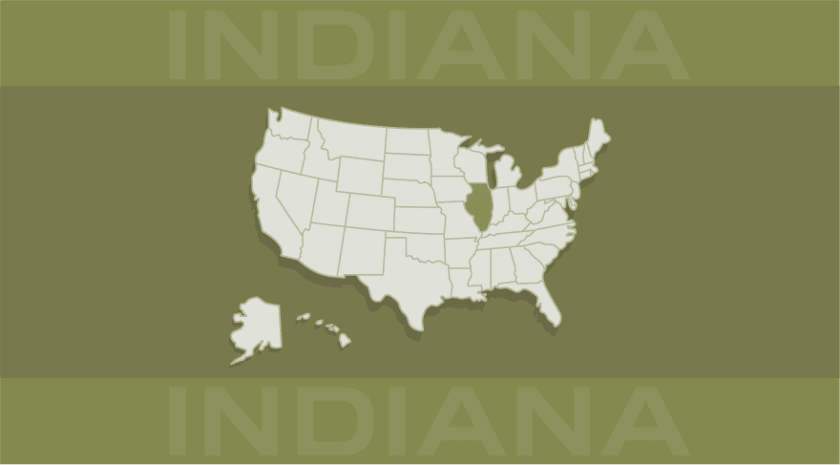 What are the state marijuana laws?

Can I buy cannabis legally in Indiana?

Can I grow cannabis in Indiana?

Is it legal to consume cannabis in Indiana?

When should marijuana become legal in Indiana?

FAQs about cannabis in Indiana

If you ask directly any law representative in the state, Is weed legal in Indiana?  They’ll tell you that it's not and hasn't been since 1913. There have been numerous attempts to decriminalize weed consumption in the Hoosier state since 2013, but nothing hasn't stuck permanently so far.

As they currently stand, Indiana marijuana laws forbid citizens in the state from carrying or consuming cannabis products and any related paraphernalia.

However, continuous work by activists in the state has achieved favorable results, with legislators in Marion County decriminalizing the possession of one ounce of weed or less.

What are the state marijuana laws?

With marijuana firmly banned since 1913 in the state, there would be no discussion about the legalization of weed in Indiana until 2013.

This year, Indiana finally held the first-ever discussion about decriminalizing possession of small amounts of weed, which the state's house committee promptly snuffed out.

In 2015 the state's house was presented with HB 1487 with a companion piece in the senate named SB 248 looking to legalize and update Indiana's medical marijuana laws.

Both pieces were looking to legalize medical marijuana under medical supervision. Unfortunately, they both failed to advance any form of relevant discussion.

It wouldn't be until 2017 when Indiana's Governor Eric Holcomb signed on HB 1148, which allowed the use of CBD oil or any related products containing 0.3% THC. Only patients with physical conditions such as seizures that resisted traditional treatment were eligible though.

While it was a step forward, the bill failed to state clear regulations for patients seeking to acquire the products.

Another step toward the legalization of weed in Indiana came when Governor Holcomb signed SB 52, which allowed the sale of CBD products with THC levels of 0.3%. This being without medical supervision, but under heavy control when it comes to testing.

If you are wondering when will Indiana legalize recreational weed, we might have a long road ahead. The governor has stated that he’ll not sign any law legalizing marijuana until the federal government does so.

Can I buy cannabis legally in Indiana?

No, you can’t. Right now, there are no programs, exemptions, or regulations allowing commerce with cannabis-related products. Not even for medicinal weed seeds. As a result, the only products that users can aspire to buy at the moment are derivatives containing CBD oil at 0.3%.

Can I grow cannabis in Indiana?

No, you can't. At the moment, you cannot grow legal marijuana in Indiana, but the land of the state is rich in nutrients. The soil here is loaded with nutrients that favor the growth of corn, soybeans, and many vegetables and fruits.

Great strains such as 3 Kings feminized seeds or Agent Orange regular seeds would grow to their full potential in the Hoosier state. However, if you are interested in other cannabis seeds and strains, you can still check Seed Supreme online.

Is it legal to consume cannabis in Indiana?

No. According to marijuana laws in Indiana, you can’t consume cannabis, not even in the privacy of your home. In addition, the state has some of the most strict regulations to punish people under the influence or who carry weed and any cannabis-related product.

If the law catches you with less than 30 grams, it’ll be typified as a class A misdemeanor on your record. The penalty will be one year in prison and a fine of $5,000.

If you are a repeating offender or carry more than 30 grams of weed, you’ll be indicted with a Class D felony and face prison time for at least two years with a fine of $10,0000.

Under current regulations, the sale and possession of marijuana paraphernalia such as bongs, pipes, rolling paper, or even carry possession charges. The penalty for these is the same.

When should marijuana become legal in Indiana?

Now that's a tricky question. Many people wonder when will weed be legal in Indiana as more states are moving toward decriminalization. In addition, more states are taking steps forward by accepting the need for marijuana products to treat complex medical conditions.

It would be logical for the state of Indiana to have medical marijuana laws in place by now. Still, the state has a body of fiercely conservative lawmakers who have posed resistance over the years

There is a dim light at the end of the tunnel, though—the promise of the current governor to lift restrictions once the federal government does. But right now, it isn't easy to put a date on such an event.

FAQs about cannabis in Indiana

Is pot legal in Indiana?

No it is not. Pot or any form of marijuana consumption is prohibited within the limits of the state, with only Marion County allowing possession of one ounce tops.

Can I still get arrested for having cannabis with me in Marion County?

Of course, you can. The relaxation of the norm on Marion County's only means that prosecutors in the state may choose not to press any charges on you when your case reaches the court.

Can I still buy marijuana seeds in Indiana?

Until you can ask "is weed legal in Indiana" and receive a sound "Yes" for an answer, we can't recommend that you buy any cannabis-related products in good conscience.