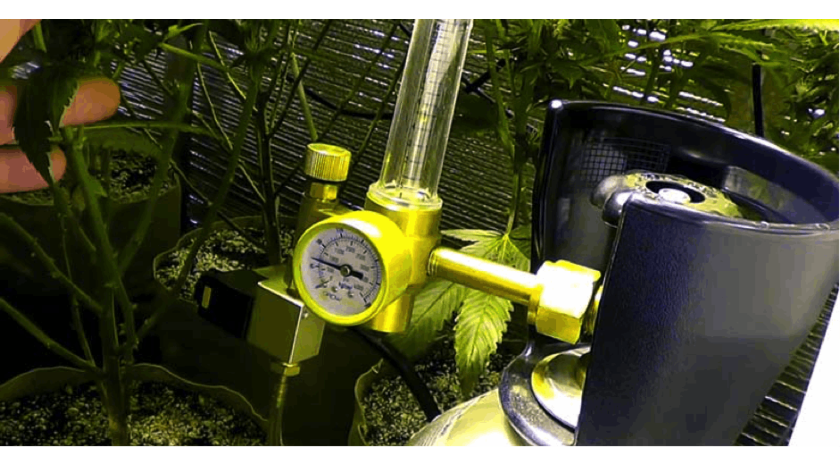 The introduction (or deprivation) of carbon dioxide is a contentious subject among cannabis growers. While some swear by the provision of additional CO2, others insist carbon dioxide deprivation can be beneficial.

But what does science tell us about carbon dioxide for cannabis? Or more importantly, is deliberate carbon dioxide deprivation ever an advisable course of action?

The Benefits of Carbon Dioxide

What Is Carbon Dioxide (CO2)?

To understand carbon dioxide, you first need to consider the way plants breathe.  The mechanics of plants’ respiration processes are largely the opposite of those of most other animals. Plants absorb carbon dioxide and release oxygen, which is of course the other way around with human beings. It’s also why plants play one of the most important roles in maintaining a safe ecosystem for people worldwide.

Typically, carbon dioxide levels in the air around us stand at approximately 350 PPM. Nevertheless, most plants are able to thrive on air with as much as 1,500 PPM carbon dioxide. This stems from the fact that there were much larger concentrations of carbon dioxide in the air eons ago – a trait that hasn’t been shed through evolution. Not to mention, one that provides the opportunity to influence plant growth speeds and general output.

The Signs of Carbon Dioxide Deprivation


Where carbon dioxide deprivation occurs, the most immediate sign is slow and laboured growth. Photosynthesis cannot occur efficiently due to the lack of CO2, in turn affecting every aspect of the plant’s health and development.

In addition, a lack of carbon dioxide can lead to gangly branches and yellowing of the leaves. On the whole, you’re effectively looking at a cannabis plant dying a slow but steady death. If looking to prevent disaster, corrective measures need to be implemented immediately.

As touched upon previously, many growers believe that carbon dioxide deprivation can be useful in forcing cannabis plants to grow blue or purple flowers. It’s a technique that’s been put to the test by thousands of growers worldwide, with completely contradictory results from one to the next. There are various theories as to how and why CO2 deprivation results in purple flowers – none of which are backed by any scientific evidence.

The thing to remember is this – cannabis plants need a certain amount of carbon dioxide to stay healthy and produce generous harvests. As such, carbon dioxide deprivation isn’t a recipe for purple weed, but simply for unhealthy plants. If you deprive a cannabis plant of anything it needs to perform its most important functions, it’s bound to have an impact on its health.

So even if you do come out with purple flowers, it won’t be as a result of CO2 deprivation. You’ll simply have compromised the health and development of your plant for no good reason.

If you do decide to go ahead and raise carbon dioxide levels, there are a couple of things you need to be aware of. First of all, higher concentrations of carbon dioxide in the air also increase humidity. You’ll therefore need to step up your humidity control efforts, in order to avoid problems with rot, fungus and general disease.

In addition, carbon dioxide levels that creep beyond 2,000 PPM can actually prove deadly for cannabis plants. CO2 levels this high can also be harmful to human beings and other animals. Keeping things as close to 1,200 PPM is advisable, while always erring on the side of caution for your safety and wellbeing.

#grow your own,  #grow cannabis,  #cannabis Posted in: Grow Your Own,  View all
Categories
Recent Posts
The ultimate guide to drying and curing weed