Though green ganja might be the first thing you think of when it comes to the color of weed, the truth is the blue strains will win out in any beauty competition. Varying from subtle hints of blue in the undertones to entire plants dominated by vivid blue shades, this cannabis family is undeniably stunning.

All known for their gorgeous hues, these stunning strains can actually vary immensely from one strain to the next. Still, SeedSupreme’s superb collection of classic blue cannabis strains are all bright, aromatic and intense.

From one family, hundreds of beauteous strains have been developed, showing the true awesomeness and potential that is contained within this herb’s heritage.

Blue strains first hit the 420 scene in the late 70s, and like many of the best strains on the market, the first commercial success came from the Netherlands. Extraordinary in color and quality, most breeders agree that Blueberry is that parent plant from which most of them have been developed.

Blueberry cemented her place as a marijuana legend after winning the High Times Cannabis Cup in 2000, but she was only the beginning.

Her genetics lie in most of the new blue weed strains that appear on the market. Not only due to her vivid cerulean hues, but because she’s a high yielder with high THC levels that tend to average at around 20%. Throw in a fruity berry aroma, and you’ve got a combination of traits that it’s understandable are highly coveted in new hybrids.

It’s fair to say that the specific medical benefits across all blue cannabis strains are difficult to pin down. However, if we remember that in theory, all of them are descended from Blueberry, that their usefulness as medical marijuana (MMJ) becomes apparent.

Blueberry is known for her euphoric and intense high, and as such can be used to relieve stress and anxiety by clearing the mind of worries and turmoil. In dispensaries across the USA, you’ll find blue strains are more commonly prescribed for physical ailments, though.

They can be particularly effective for muscular problems such as muscle spasms and cramps, and are also prescribed as a pain-reliever.

As with most varieties of weed, blue strains can also induce a potent munchies effect that can alleviate nausea and lack of appetite. 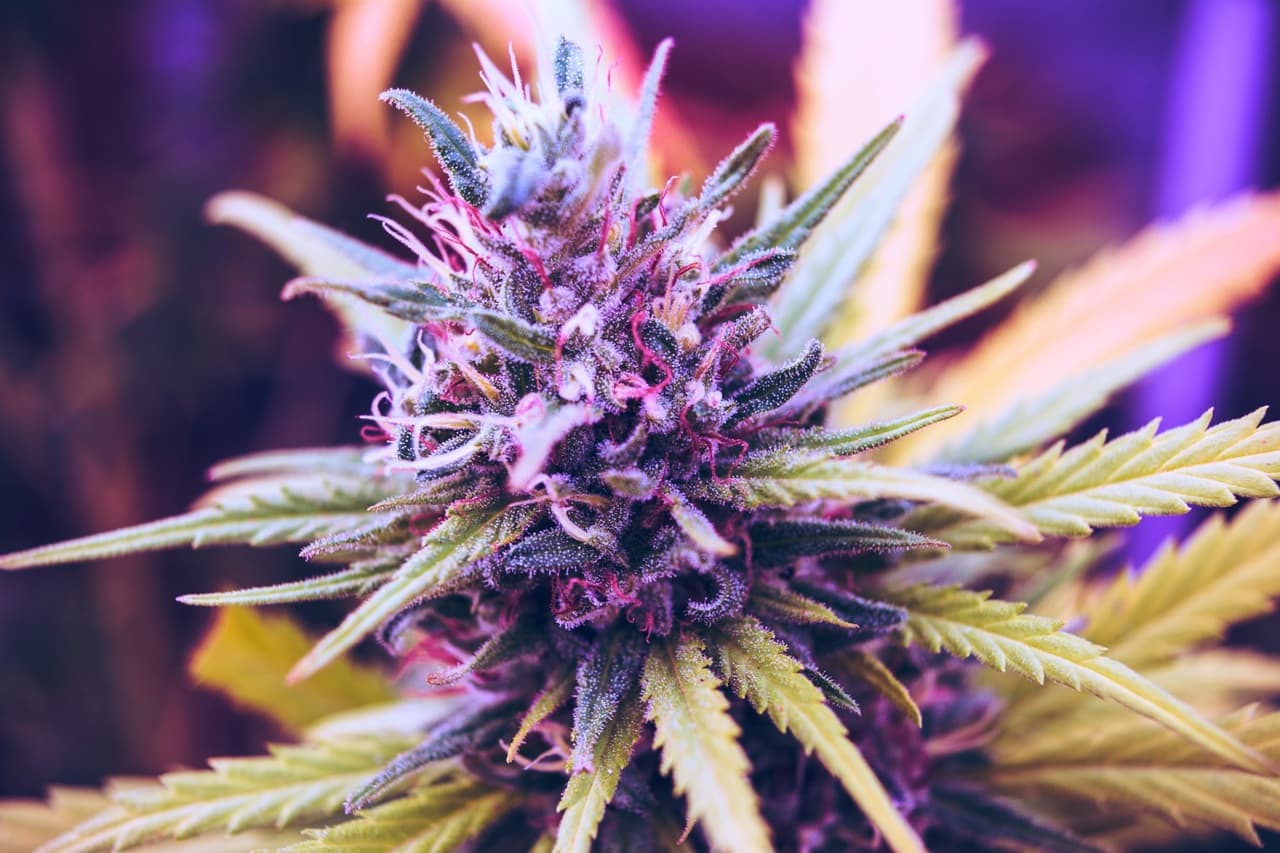 Many blue strains are bred for the Indica-dominant effects of the parent strain, Blueberry, which has led to the birth of several cannabis legends.

California strain Blue Mystic is the result of crossing Blueberry and Northern Lights, and provides a potent body stone and narcotic-like high that highlights the potency of her heritage.

Meanwhile, crossing Blueberry and White Widow led to the award-winning delights of Blueberry Widow, more clear-headed in her effects and somewhat psychoactive.

Effects across blue strains as a whole can vary, depending on which hybrid you choose to toke. What can be guaranteed is that you’ll find their nugs to be eye-catching and vivid with variants of blue and purple, but try not to put too much stock in the color.

Trust us, the shade of your weed really makes no difference to the strength of the high.

We’d love to tell you that the blue family of cannabis is characterized as much by its taste as its color. But at SeedSupreme, we prefer to tell you the truth.

Though Blueberry is famously blue in color and berry in flavor, that doesn’t necessarily mean that you’re going to be tasting sweet fruity flavors with every other blue strain. In fact, though most blue strains come from Blueberry, often hybrids are bred with other, stronger flavors from second and third parent genetics.

Sometimes you’ll find the sweetness of Blueberry’s smoke shines through. Other times, you’ll find that despite their consistent coloration, they can be surprisingly varied in flavor and aroma.

The modern family of blue strains as we know them now owe their excellent genetics to several landrace strains and an unknown Indica variety, but years of breeding and stabilizing have considerably improved upon the first strains that showed up in the 70s.

What each blue strain shares with its sister strains is coloration - ranging from brightest blue to pale lilac, royal purple, and even red. Each plant displays variations of beautiful blue hues across their calyxes, leaves and stems.

The intensity of the coloration in blue weed strains is temperature-dependent. This can be seen most clearly when these cannabis seeds are grown outdoors, as colder conditions during the flowering phase tend to produce more vivid shades.

Some growers may notice phenomena on the leaves, including white spots or stripes. This is actually another genetic feature of the plants, and has no effect on their growth, potency or flavor profile. Saying that, blue strains do tend to grow a little slower than some hybrids, but we like to think of them taking their time to look their best.

The strength of the coloration in this family is mostly down to how cool the plants are kept during the later stages of their growth cycle, as colder environments stimulate the production of anthocyanins in the plant. But honestly, starting with the best possible seeds is the best growing advice we can provide to get your ganja as pretty as possible.

With so many blue cannabis strains to choose from, it can be hard to decide which delectable herb to grow first. But we’re here to help, as though strains such as Blueberry will remain eternally popular, the blue family goes far beyond her berry flavors.

What you intend to do with your crops can determine which blue strain is right for you. If you’re looking to make hash or concentrates, then we’d recommend Blue OG’s citrus, berry and earthy flavors and 16% THC.

For tokers seeking pain relief, we suggest sampling the gorgeous purple hues of Blue Tara, well-loved for her nerve-soothing and euphoric effects.

If you’re a cultivator looking to take advantage of a colder climate and grow your own blue buds, then Blueberry Gum is a great option. Particularly well suited to cooler environments, her Indica-heavy genetics include Hash and are more than capable of calming the body and mind.

Of course, if you prefer to stick with the classics, SeedSupreme’s Blueberry seeds come in regular, autoflowering and feminized variants depending on your preferred method of growth.