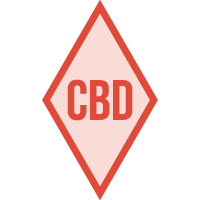 
Crossing the heavy-hitting Indica hybrid Kimbo Kush with the famed medical strain Harlequin, the resultant hybrid is high in CBD and capable of soothing even severe cases of anxiety, depression and stress. Add in a third Ruderalis to that killer combo and we now have a fast-growing feminized strain that combines generations of cross-breeding.


Most notably, this musky, citrus strain is popular for treating epilepsy, and has been found to reduce tremors and control epileptic seizures, as an alternative to traditionally prescribed chemical medications.


Not typically popular with recreational users, nevertheless CBD Harlequin Kimbo Kush can induce a mild, gentle head-high that eases the nerves with a light, non-psychoactive buzz.


A particularly appealing strain for growers, CBD Harlequin Kimbo Kush Fast Version is exactly what it says on the tin - fast. In no time at all, these feminized seeds will shoot up and bloom after only 6 weeks. During that time, the only maintenance required of her cultivator is some light trimming and pruning, and a bit of topping. Once she’s ready for harvesting, a healthy yield of 400 grams per square meter will be your reward.

A fast-flowering strain, CBD Harlequin Kimbo Kush will give off a lovely musky odor right from the start, her sweet earthiness recalling the Afghani landrace strain.


Her Harlequin genetics add a zesty note to liven up the musk, refreshing with flavors of lemon and citrus tang.

Recreational cannabis consumers might not find that CBD Harlequin Kimbo Kush Fast Version is quite to their taste, as her THC levels are fairly low - hovering around the 6% to 12% mark. As such, her effects aren’t too intense, and seasoned smokers might find that they feel no effects at all from a joint of this ganja, as she’s more CBD heavy, and often this can counteract any psychoactive effects.


For newer users, you can expect a light buzz and feeling of being uplifted - your mood will brighten, and your frazzled nerves might begin to calm, filling you with a peaceful, happy sensation.


This will deepen into a comfortable relaxation, without the sedated feeling often imparted by strains heavier in THC. Due to the mildness of the buzz from CBD Harlequin Kimbo Kush, the likelihood of adverse side effects is low, even in higher doses.

With a CBD around 10%, and a THC content of the same, CBD Harlequin Kimbo Kush is a strain that straddles the two key chemicals in cannabis to provide incomparable therapeutic benefits to consumers.


Synergizing her CBD volume with her excellent terpene profile, CBD Harlequin Kimbo Kush is a strain prized as an all-natural alternative to opioid-based pain medication, and many consumers will sing the praises of this strain as a relief for chronic pain.


But analgesia isn’t her only skill - this strain is one of the few types of marijuana available that’s capable of controlling epileptic seizures and tremors due to her high CBD content. This also makes this hybrid a beneficial strain for sufferers of severe anxiety, stress and depression, promoting a good night’s rest and relaxation without sedating smokers.

CBD Harlequin Kimbo Kush Fast Version grows exactly as you might expect, for the name - fast.


Since these seeds are feminized, you can expect a 90% or more turnout of female plants, and since she’s a photoperiod you can expect a strong cannabinoid profile - without the stigma that comes attached to autoflowering strains. No, as a fast version, you have the best of both worlds, and you get to harvest in as little as six weeks.


This incredibly short flowering period is almost without downsides really: she’s a small, compact plant that will grow with minimal effort in most environments. Indoors, outdoors or in a greenhouse, she’ll never go above 100 to 150cm at most.


Some small amount of trimming is required with CBD Harlequin Kimbo Kush to keep her branches in check -  and you’ll find that these plants need topping to control their height, but otherwise, this strain is easy as pie to manage.


Her vegetative phase is around the same length as other strains, but once CBD Harlequin Kimbo Kush begins to flower, you’ll find she moves fast, exploding into bloom in 6 weeks or less. When you’re ready to harvest, you can expect up to 400 grams per square meter of olive green buds and lime sugar leaves, which ain’t bad for less than two months of effort!


If you’re a fan of growing outdoors, you’ll find this strain does well in a warm climate - think sunny, Mediterranean weather. Harvest time will roll around in late September, and you’ll get a rewarding yield of 500 grams per plant.


Musky with a refreshing citric tang, CBD Harlequin Kimbo Kush isn’t known for her flavor, but she holds her own regardless. For recreational users, this might come as a disappointment, as few consumers have reported psychoactive effects from a joint of this stuff - but that’s not to say she’s pulling the punches elsewhere.


For medicinal marijuana smokers, this strain is a dream come true. The 1:1 ratio of CBD to THC means that the buzz is mild and non-sedating, but this strain's amazing as an analgesic. Some reports even state that they’d choose CBD Harlequin Kimbo Kush’s pain-relieving properties over traditionally prescribed medications. And for epilepsy sufferers, she’s been found to control tremors and even prevent seizures where chemical alternatives have failed.


This fast-growing version of CBD Harlequin Kimbo Kush is a cultivator's delight, flowing from vegetative to a flowering state in no time at all - and ready for harvest in just 6 weeks. If you were thinking she’s too good to be true, you’d be wrong - even with such a short life cycle, you’ll still find that properly pruned and topped, this lady will leave you with 400 grams per square meter indoors, and 500 grams per plant outdoors. Not too shabby, eh?